Last night my wife and I watched the movie Boogeyman on dvd. I typically don't get SCARED [to the point that I jump and scream and clench my fists so hard that my knuckles turn white like SOMEONE I know] during scary movies - and this was no exception. However, I do sometimes get a good thrill. I actually fell asleep during part of it - not because it sucked, but because it was late and I was tired. The movie was okay, it had some of those good scares in it, the kind that gets your hairs to stand on end. But...

...for the first half of the movie they didn't show the actual Boogeyman character. They kept showing dark spaces under beds and partially open closet doors FILLED with shadows and rooms and hallways lit enough by moonlight to get you to think 'did I just see something?' This effect was the scariest [and the best part of the movie], I think they took advantage of the fact that the unknown is what scares people most. But during the end of the film the director showed what HE thought the Boogeyman would look like. This wasn't even CLOSE to what my nightmares as a child, led me to believe he would look like.

What I'm getting at here is that fear is based entirely on the unknown. If any of you reading this know anything about me, then you probably know that I'm not a psych major - so don't SUE me. BUT - In my opinion: I think that the more you know - the less fear you will have. To illustrate this point I have created a graph. 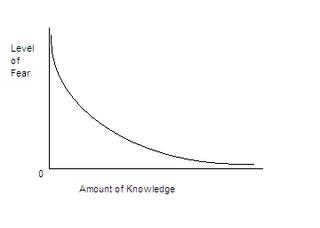 you should delete the stupid spam comments.

of course not. maybe this one does though...