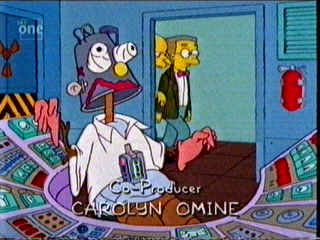 In Guess Who's Coming to Criticize Dinner?, what food item earned the honour of being Homer's first negative review?

A. Gum under the kitchen table
B. Coffee and donuts at work
C. Pizza from under the couch
D. The new Squishee flavour from Kwik-E-Mart

Some memorable episode quotes:
Editor: I just had a thought. We're looking for a new food critic. Someone who doesn't immediately poo-poo everything he eats.
Homer: No, it usually takes a few hours.

another one:
Homer: Well, what do you think?
Editor: This is a joke, right? I mean this is the stupidest thing I've ever read!
Homer: What's wrong with it?
Editor: You keep using words like "Pasghetti" and "Momatoes" You make numerous threatening references to the UN and at the end you repeat the words "Screw Flanders" over and over again.

and another:
Homer: Really, the only word to describe it is :drools:
Lisa: Hmm. What's the English equivalent for :drools: I'd say ... transcendent.
Homer: How about groin-grabbingly transcendent?
Lisa: Uh ... I don't think so.
Posted by Ferda at 11:32 a.m.

Those quotes are groin-grabbingly hilarious.

For the trivia answer, this is a total guess, but...

B. Coffee and donuts at work

Editor: I just had a thought. We're looking for a new food critic. Someone who doesn't immediately poo-poo everything he eats.
Homer: No, it usually takes a few hours.

Through the process of elimination, I guess D,
The new Squishee Flavour

Homer should love Pizza and Donuts, regardles of where they came from.

I don't remember any episodes where Homer chews gum.

not many takers on this trivia eh? As Jen put it: "it is a groin-grabbingly tough one" Hence I will not mock you both for getting it wrong. Correct answer was: C. Pizza from under the couch

Oooh... that was a tough one! You stumped us all! Even Mike, and that's hard to do.