No need to tell me, since I already know. I am officially the worst blogger of all times. Fitting that the last name change I gave this blog was 'blogging at it's worst' (or some derivative of that).

Where to begin - what's been going on in the life of the Pimpsons? I suppose work has taken up quite a bit of our time. As you may recall we both started new jobs around the December / January time frame and as such: work is work. And work is busy and time consuming.

Our winter ultimate team finished the season a few weeks back in 4th place or so. It was fun, but both Ferda and I are really looking forward to summer ultimate. Perhaps I mentioned this already, but we're set to play on a number of different teams:

We've spent some nights recently looking at new cars - well, previously enjoyed cars but new to us. Ferda's old Honda is still tickin' but we are keeping our eyes open for a good deal on a second car. At the current time, we are doing fine with one car, but things might change in the future making it too hard to carpool for work in the mornings and afternoons. We decided to stick it out for now but have a good feeling what to get and where to get it. We visited Mega Mitsubishi in Hull and they have a giant selection of used cars at really good prices.

Lately over the past couple months I've hit a slump in my motivation to continue at the gym. I've come across this before and mentioned it before. I don't have a plan to get me back into it, I'm just hoping it will eventually change and I'll start to feel more 'in to' it. I still go about 3 days a week, but I'm not as hardcore as I once was; not as motivated to work hard or do that extra set of [insert workout name here].

As often as possible on the weekends I've been heading up to Montreal to see my grandparents and my dad. Nice to see them. Apparently a lot of the rest of the family is heading to Montreal (and the cottage no doubt) for early May. My cousin from Victoria, aunt from Vancouver, etc, are flying in early May - should be a good time, perhaps another reunion-style-thing at the cottage. I have some good pics of one of these reunions from back in like '94 or something on my PC at home. I should try and dig it up and post it here. Not that many from my family look at this site, but regardless. Speaking to that matter, maybe I should spread the link to super_ap to my extended family. I think that's what the great Palmer has done, however, he has a blog that doesn't disappoint. Whereas I have slipped into a posting block. Nothing really fantastic to write about. Or perhaps it can be attributed to laziness.

Ferda and I saw the new Will Farell movie Blades of Glory the other weekend. Very funny. Rented a few movies the week before that, they were Assault on Precinct 13, Inside Man, and Kingdom of Heaven. They were all decent, but, obviously, nothing to seriously blog about. Oh - and did I mention before we saw the movie 300? We saw it at the Imax which was a pretty cool experience. Amazing sound setup they have in there. So crisp, precise, and incredibly loud. I really liked the 300 a lot, and for a few days after we saw it, I was always shouting at Ferda:

Until she threatened me with the usual things a wife will threaten her husband with. I'll leave the specifics to your imagination. But to finish off this long, random post, here's a neat comic strip encompassing that line with our pal Mario and friends: 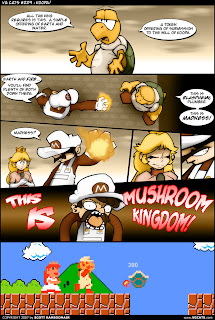 Having your extended family read your blog keeps you on your toes for postings, otherwise you get phone messages at night from your grandma saying she's staying up all night until I make a posting.

I also echo matt's comments about 4 days a week Ultimate.

Although, I find it awesome that you love something that much! Very cool! What is a good term for ultimate players? Break an ankle? Flick that wrist?

About the second car, I have one word for you James "Motorcycle!"

hahah oh Mike you are funny!

Hey Ferds,
I seem to recall that you enjoyed riding on the bike. Why not, they are fuel efficient, cheap when compared to a car, fun to ride, would be great for a quick jaunt to ultimate....

Got ya thinking eh!

See and then Matt would have one as well. I think it's worth James getting a bike just so Matt would buy one!

Plus, once you faceplant, I can get your delicious kidneys!

I would love to have a bike. But seeing that you can only drive it maybe 7 months of the year - it doesn't seem like a viable solution.

And also - what's with all the recent sellings of bikes?
*points fingers at Dave and Cobro*