Cat Cat Watermelon is a cute little stacking game in which you are presented a random order of cats and watermelons that need to be stacked on top of eachother. Simple as that.
Posted by James at 3:03 p.m. 9 comments: 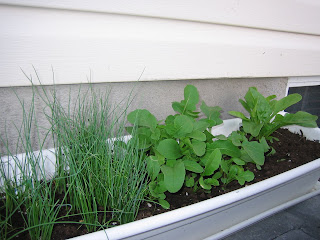 Wow. June 22nd. Second day of Summer already.
I planted some weird veggies back in May. Starting from the left: some kinda chive or leek, then rocket, and finally spinach beets. Ferda's mom Ergul brought us the seeds one year from England and we decided to try and cultivate them. Seems to be working out ok, haven't tried any of them yet though.
Posted by James at 7:52 a.m. No comments:

Ferda and I both had Friday off, which was really nice. We slept in, watched some tv and the movie Eagle Eye which I really liked. Also did some groceries and chores before I had to leave home around 6pm.

I participated the Cancer Society's Relay for Life which started at 7pm Friday night and went throughout the night until 7am Saturday morning. It was a very successful event. According to the website, more than $600,000 was raised in the three Ottawa events (Nepean, Stittsville, Orleans). Our team of six decided we should run the full 12 hours, and we did. Of the near 300 teams there, we placed 3rd in overall laps completed which was quite impressive. Somewhere around 325 laps. My share would likely be about 20 kms ran.

After the event was over, I went home and showered and grabbed my ultimate gear and headed to the CHEO BBQ ultimate tournament. Luckily our team had a bye for the first game so I could grab about an hours worth of sleep before playing. Our team did ok considering we were playing in the comp division. However, by the third game my knees were giving out and I had to call it quits. I just could no longer keep up with my mark and aggressive cuts just hurt too much. It was a really nice sunny day though and I'm glad I went. Ferda was there too volunteering throughout the day so she got to watch a number of our games. When I got home around 3 or 4pm I crashed pretty hard for the remainder of the night.

Sunday had me downtown for union business (for which I'm still the treasurer) for 9-3; we got a lot of stuff accomplished so it was a good day. We also had a nice lunch at Baton Rouge. The rest of Sunday evening had me at home, chilling out with Ferds.

My knees are feeling much better now, which is good because I will have an ulti game again tonight (providing the weather holds out). Not too excited to be back at work this morning, but I suppose I don't really have a choice. Peace out internet.
Posted by James at 8:20 a.m. 16 comments:

So we tried a new pizza place last night, Romeo's Pizza. I guess that Ferda had been there a long time ago when she first moved to Canada. We stopped on the way home from our ulty game and placed our order: Kebab Pizza.

In retrospect, it was a gamble. Donair meat on a pizza? What were we thinking? While we waited for our pizza to be prepared, we walked to the other end of the strip mall to the XS Cargo store and browsed around. We found a medium sized rice cooker and bought it for $9.99 - hopefully try it out tonight and see if it is any good. Ten minutes later it was time to return and pick up our pizza.

Ferda opened the lid and took a quick glance... and it was... a thing of beauty. We raced home and thoroughly enjoyed our pizza pie.

Now I know I throw this around a lot, so perhaps it has lost some meaning, but:
Best. Pizza. Ever.
Posted by James at 9:57 a.m. 3 comments:

Wow, is it ever raining today. Got kinda wet on my walk in. Oh well, I still enjoy the fresh air, regardless of the amount of precipitation falling.

Played ultimate last night. Tied the other team 15-15. We should have won: at one point we had a 7 point lead on the other team. Embarrassing to give that up.

I'm sure all the Apple Fanboys are going nuts today after yesterday's varied announcements at WWDC '09. I have to admit though, a $99 iPhone is pretty fricking exciting.

And finally, for all the people who watched Up already: wasn't Partly Cloudy the BEST pixar short ever?

Sunday morning/afternoon we headed over to the Colliseum on Carling to watch the latest Disney/Pixar film, Up.

If you like Pixar movies (Toy Story, Wall-E, Cars...) then you will absolutely love this film as well. And did I mention it's in 3D? The 3D part was cool, especially if you have never seen a film in 3D before, but not necessary to enjoy the movie.

I hadn't been out to the theatre for a long time, but I really had a good time watching this movie. Anyways - back the movie. This is a must see. Whether you wait for the DVD rental or see it now in theatres, you must watch this movie.
Posted by James at 8:24 a.m. 5 comments:

The premise: Tower defence game with a twist. Once you have your towers where you want them, you can place different gems to kill the various creeps. You can combine your gems to upgrade and have more powerful towers. Traps are also used.

The review: Really liked this game. Once you get into it, and understand the mechanics, it will easily hold your attention for a long time, which is good because the full game is HUGE. Mind-blowing-huge. Even when you've beaten the final level, there's still more gameplay if you wish. Even though this is a prequel to the already popular series of Gemcraft, this is still a great flash game worthy of a look, especially if you like the tower defence genre.
Posted by James at 2:23 p.m. 1 comment:

Much like James I am also quite fond of sandwiches and although I love our home-made creations there are some sandwiches which are tough to replicate at home. It is very difficult to place these sandwich shops in order but here are my top 3 favourite place in Ottawa for delicious sammys

3 - Sherwood Market and Deli - talk about hole in the wall. This place is just off of Carling on 111 Sherwood Dr. It looks like an unsuspecting deppanneur but if you walk in and wander towards the back you will see the display of salads and samosas and a long list of divine sandwich creations. My favourite would have to be the bbq chicken with avocado and bacon. They give you a choice of breads but if you don't specify they will prepare your sammy with some delicious spongy yellow egg-bread. They stuff the bread with a generous helping of shredded rotisserie chicken breast, lettuce, avocado and bacon and deli sauce which is a mixture of mayo, mustard and black pepper... mmm divine... at $3.99 it is not too bad on the wallet either.
I bought us each one of these sandwiches last night and it earned me plenty of wife points. I wish I took a picture because I can't seem to find a picture of this place nor their sandwiches to add to this posting. Be sure to keep your eyes peeled for this place as it is a true gem.

2 - Johny Farina Lunch - this Elgin Street restaurant started an express take-out lunch extension a couple of summers ago and while I was on French training downtown I frequented JF for their take-out sandwiches. I haven't been here in a while so bear with me as I do this off memory. I usually go for one of their cold cut sandwiches. JF also has a nice selection of breads to choose from but I always go for the crusty multi-grain. I love that they stock spicy eggplant so I always ask for some of that on my sammy. They will stick the sandwich in the panini press for a bit so the cheese is nice and melty. Mmm so good. Probably because of its location it is a bit pricier but not by that much. Sorry I can't recall exact $$ but well worth it

1 - Dirienzo's - I believe there are 2 Ottawa locations for this mecca of sandwiches but the one I am most familiar with is the one on 111 Beech Street. The first time I visited this place I could not make sense of it because, much like the Sherwood deli, this is another hole in the wall place which is a grocery store/deli. Between 11:30-1:30 there is always a line-up at this place. During the summer the lineups wind all around and extend to outside of the little store. It is well worth the cue as the bread is nice and fresh.
There is a little process here. You get to pick your bread of choice, I personally like the crusty white bread, pass it over to the sandwich artist and give him your order. My sandwich of choice is the #5 with spicy eggplant. I believe the #5 is turkey, havarti with spicy salami and some lettuce, tomato and mayo. It is so delicious!
Again, this is a very wallet friendly sandwich at $4.00 and the home of the best sandwiches in Ottawa!

All sandwich shops are also James endorsed although I don't think he can pick a favourite. He just loves them all equally.

What are some other contenders across the city? I would love to try a new place and please don't say Subway...
Posted by Ferda at 8:45 a.m. 17 comments: